The MSVC Community 2019 edition can be downloaded for free.

The Visual Studio installer presents you with a ton of options for various scenarios you might use it for via the “Workloads” landing page. This is fine for general deployment, but the full install weighs around 7 GB, so you may want to choose individual components to minimise your download time.

When installing include also these individual options:

The installer does ship Python, but not its debug build, so it’s better to use the one provided by vcpkg. It will be installed in the following section.

You will need several libraries that GemRB depends upon to work.

The required external libraries are SDL and Zlib. The other dependencies are optional,
for example the audio library OpenAL.

To download them, we use VCPKG, a package manager that is specifically made to support building these libraries (among others) under Windows.

Then run the following commands. Hint: no need to type anything, copy and hit Shift+Insert.

GemRB provides a manifest file for VCPKG dependencies. During the GemRB build, VCPKG will automatically download and install all the dependencies specified in the manifest. The file is located in /platforms/windows/vpkg.json.

Get GemRB sources and build them

Open Visual Studio again, pick Clone or check out code and point it to your fork or the main repository (see note):

Visual Studio will gladly import GemRB as a CMake based project. The landing page will give you the option to open the built-in CMake settings GUI if you wish to change any default settings.

You should configure a couple of things: 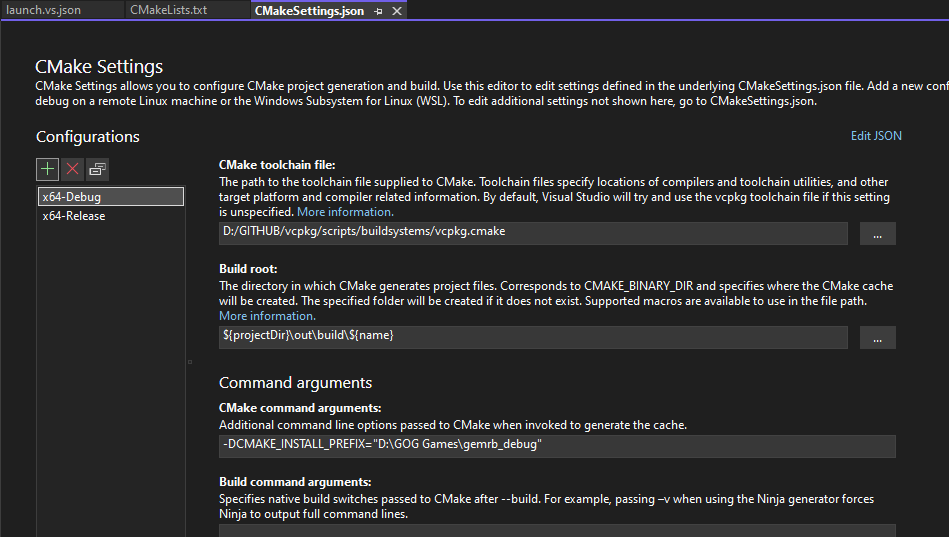 When you are happy with the configuration, go to Project->Generate cache for GemRB.

To build GemRB go to Build->Build all or hit F7.

If you get any compiler errors instead of a working executable, then save the contents of the build log and open an issue on the tracker.

Configure and run the game

If you want to run GemRB from within Visual Studio with several config files to be able to test several games at once, add new launcher configurations that specify a path to those config files, so the final invocation is eg. gemrb.exe -c torment.cfg or gemrb.exe -c myiwd2.cfg.